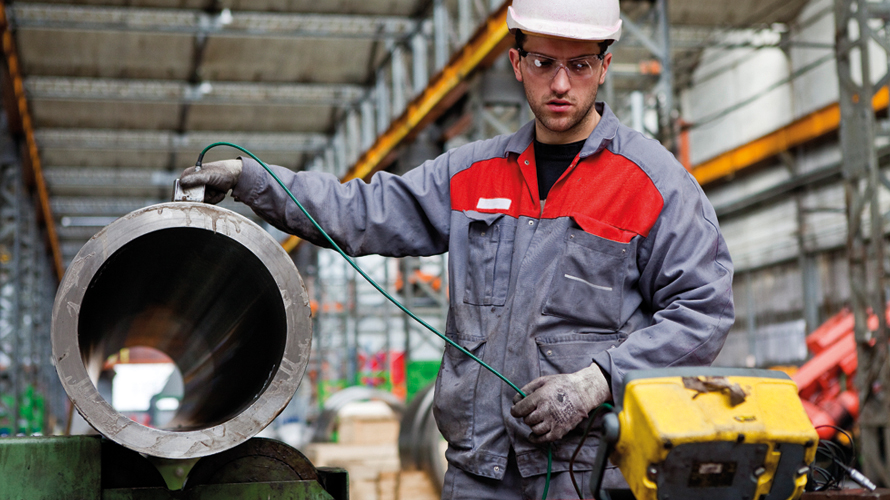 The principle of ultrasonic testing is to transmit and propagate an ultrasonic wave in the part to be tested then to collect and analyse the wave following its interaction with the material. Based on this very general principle, there are numerous specific techniques, depending on whether the test is conducted in transmission or pulse echo mode, whether or not the transmission and reception devices are merged, the type and tilt of ultrasonic waves used, etc.

The most extensive test method, called pulse echo, can be compared with medical echography. The transmitter and receiver (whether or not merged) are positioned on the same side of the part. The receiver collects the echoes generated by pulse echo or diffraction on the obstacles encountered by the wave, including defects, interfaces between materials or the surface of the part.

The transmitter and receiver devices, known as ultrasound probes, are normally based on the piezo-electric effect. The main component, the transducer, is made up of a piezo-electric disc that converts an electric signal into mechanical vibration and vice versa.

One major change in ultrasonic testing has been advances in phased array techniques using networks of piezo-electric probes controlled electronically at reception or transmission. This technology is in common use today; it can adapt the characteristics of the transmitted wave, especially its focus and tilt, by applying electronic delays to the different elements, calculated according to the target objective. An area of the space can therefore be swept or the ultrasonic beam can thus be focused at different depths in the material using a same probe.

The frequency of ultrasonic waves used varies according to the materials and the applications in a range of between 100 kHz and 20 MHz approximately. The choice of frequency is the result of a compromise between spatial resolution (even better the higher the frequency) and penetration power (that decreases with the frequency due to the attenuation phenomenon). A steel part is typically tested at frequencies of between 1 and 5 MHz.

In the so-called pulse echo configuration - the most common -, testing a part involves moving an ultrasonic probe acting as both transmitter and receiver on or above the surface and collecting and then analysing the signals received.

Distinction is made between contact tests, where the ultrasonic probe is positioned on the surface of the part using a couplant, and immersion tests, with the probe then moving a certain distance from the part in a liquid medium, normally water. Distinction is also made between manual tests, where the probe is moved by an operator, and automated tests.

The choice of probe, its dimensions, the frequency of waves it supplies, the application of specific rules (laws of delays for the phased arrays) determine the characteristics of the ultrasonic beam transmitted in the part and therefore the sensitivity and spatial resolution of the test. Today, modelling is commonly used at the design phase to estimate these characteristics.

Diagnosis is based on analysing signals received, with a defect made apparent through echoes received from the reflection or diffraction of the incident beam. The time of flight, i.e. the time between receiving the echo and exciting the transmitter, provides information on the location of the defect whilst the amplitude is used for the detection. The temporal acquisition window is thus defined based on the area of the part in which defects are sought.

Depending on the application, the diagnosis can be based on simply exceeding an amplitude threshold when moving the probe or apply a more advanced analysis of echographic images of the area inspected. The terms B-scan, C-scan, etc. presentations are used. The amplitudes measured are always amplitudes relative to a reference. An ultrasonic test always includes a calibration phase on mock-ups containing reference reflectors. These are especially used as the basis for defining detection thresholds.

Ultrasounds are today one of the most widely used NDT methods. A broad spectrum method, it can be applied to numerous materials and adapted to different geometries. It can be used for detecting any defect shown as discontinuity with mechanical properties (crack, inclusion, porosity, etc.).

Hand-in-hand with defect detection, ultrasounds are also used for the dimensional analysis (thickness measurement), sorting and characterisation of materials (identification of steel grades) or to characterise surface treatments (heat treatments, for example).

- Volume method: the penetration of the ultrasounds can examine materials of considerable depth;

- huge sensitivity over a wide range of dimensions of defects and parts by playing with the method settings (such as the frequency used);

- quantitative diagnostics and performance assessment of the method. Many modelling tools available for this purpose;

- adaptability of methods to the materials and geometries of parts. Applicability to most metallic or composite materials;

- wealth of information provided: Possibility of localising defects accurately, of dimensioning the defects and creating images of the area tested;

- quick and easy to use;

- method requiring access to one side of the part only;

- no chemical or radiological disadvantage;

- ultrasounds are the subject of active R&D and continuous technological innovations.