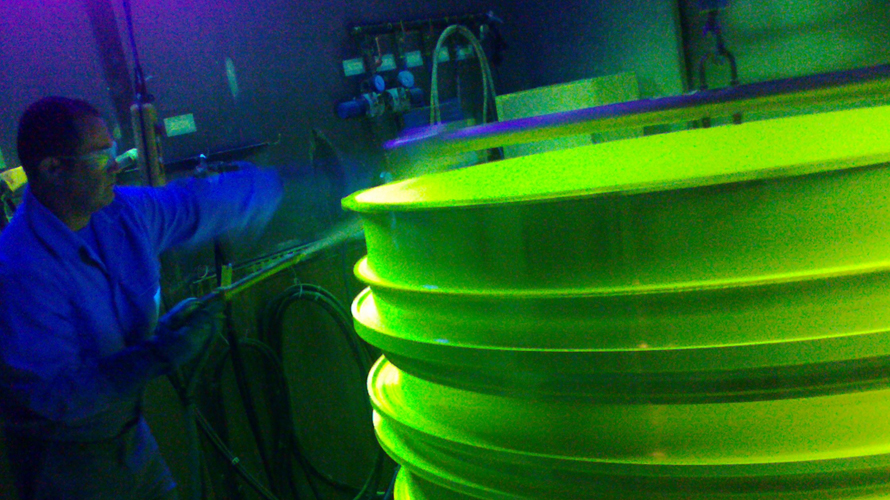 Penetrant testing is by definition the bleedout of a liquid (or a gas) from a discontinuity into which it was introduced previously during a penetration stage. As logical extension of visual testing, this method is therefore used to detect surface-breaking discontinuities on the part tested in the form of coloured or fluorescent indications, observed on a white or black background respectively.

There are four stages in penetrant testing, the first being to thoroughly clean the part to be tested. A coloured and/or fluorescent liquid, called the “penetrant”, is then applied onto the surface to be tested during the second phase. It penetrates by capillary action inside discontinuities (corrosion cracks, porosities, pitting, sink marks, cold shut, lines, seams, laps, rectification cracks, heat treatment laps, incipient fracture micro cracks, etc.) requiring penetration time before the next stage.

Excess penetrant on the surface is removed during stage 3.

The indications are viewed, depending on the type of penetrant used, either under artificial white light (or daylight) or under ultraviolet radiation (UV-A).

Penetrant testing is an NDT method that can easily be incorporated into production lines or maintenance. The parts are processed at different stations: penetrant application, rinsing then emulsification (when using a post-emulsifiable penetrant and a hydrophilic emulsifier), washing, drying and developer application.

An inspector always carries out the inspection in appropriate viewing conditions.

There are two distinct processes:

- fluorescent penetrant testing: inspection under ultraviolet radiation (UV-A) or, if appropriate, during an intermediate test, under actinic blue light.

The sequence of operations described above is similar regardless of the process used. The only operating differences come basically from the penetrant system (product family) used.

A few cases below:

- dry developer: Very fine, white, fluffy powder applied to the areas to be tested, applicable only when using a fluorescent penetrant;

The detectability of discontinuities extensively relies on surface preparation quality, which implies that the test results will be improved the more thorough the preliminary cleaning. Standard ISO 3452-1 classes fluorescent penetrants into five sensitivity levels, from the least sensitive, Level ½, to the most sensitive, Level 4.

Classification of processes: The following classification figuring in the ISO standards is used to characterise a given penetrant testing process. For example, the product family comprising a post-emulsifiable fluorescent penetrant, with Level 4 sensitivity, which is removed using a hydrophilic emulsifier and then developed with dry powder, is designated IDa4 according to ISO 3452-1.

It can detect open and surface-breaking discontinuities in all metallic materials, numerous mineral materials (glass, ceramics) and also certain organic materials. It is therefore used to test:

- rolled or drawn products in service.

Over the years, this method has managed to adapt to the increasingly rigorous health, safety and environmental protection standards and it still widely used.

Apart from the low implementation cost, one of the main advantages is that it is very reliable in locating discontinuities like cracks, corrosion cracks, porosities, pitting, etc., regardless of their direction or position in the part to be tested and also regardless of the part's size and geometrical complexity. It is important to note, however, that the discontinuities must be open and surface-breaking, and not clogged, for reliable testing.

In addition, penetrant testing can be defined as a global method, meaning that a part can be tested in a single operation or a large series of small parts can be processed at once, which is, of course, not possible for radiography, gamma radiography, ultrasounds or eddy currents, etc.

Text prepared by COFREND in conjunction with Patrick Dubosc and Pierre Chemin.