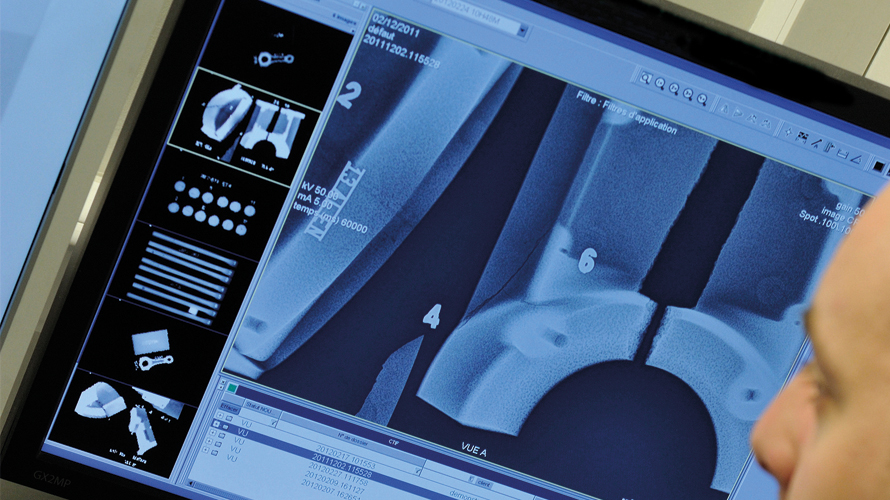 - a set of digital detectors.

The method’s principle is based on differential absorption of the environment according to the atomic number of its constituent atoms and the density. Any missing material will cause less absorption and therefore, locally, greater optical density on the film or a stronger grey level in digital images.

In industrial radiology, X-rays are produced by an X-ray tube (most often) or by a particle accelerator for high-energy applications. The gamma-ray sources used in industry are Iridium-192, Cobalt-60 and Selenium-75.

Radiography is a technique that can visualise missing material in the volume of the object tested in a two-dimensional image. There is a testing technique also based on absorption of electromagnetic radiation used to obtain the material densities through elements of volume - tomography.

Given the ionising nature of X- or gamma-rays, strict radiological protection instructions must be applied.

The silver films are developed manually or in an automatic machine. The radiograph obtained is a negative with more or less significantly blacker areas depending on the amount of radiation transmitted. The blackening of the film is characterised by its optical density conveying its ability to absorb the light. The film is studied in an illuminator with an intense light source. The missing material in the object is shown dark on the radiograph.

The latent image of phosphor imaging plates is revealed using a scanner. In this case, the radiographic image disappears and is shown in the form of a digital file defined by its size in number of pixels and its encoding in grey levels. To be able to use the  phosphor imaging plates after scanning the information, the radiation-sensitive compounds are returned to their stable energy state: this is the erasing operation. There are mainly two types of scanner: half-moon or cassette-based systems. Cassette-based systems are less fragile and more suitable for industrial use but cannot follow the curvature of parts. The digital images obtained can undergo image processing to make it easier to detect indications. This radiographic technique using phosphor imaging plates is known as computed radiography (CR).

Other types of detector can produce a digital radiograph directly. They are used with fixed installations with a remote handling system that can vary the position of the object (or an area in it) in relation to the radiation source. The objects to be tested can be observed by the operator either in real time with possible recording of a video (radioscopy) or off-line on images obtained after acquisition processing. When observing digital images off-line, optimising contrasts or processing images (mathematical filters) can be applied to them. The detector, which was initially a brightness amplifier coupled with an optical camera, has these days been replaced by a set of digital sensors assembled most frequently as a flat panel. This radiographic technique to produce digital images directly is called digital radiography (DR).

For automated testing of large aeronautical structures, very high resolution (around 31 µm) CCD cameras are sometimes used. They can be combined with a fibre optic network positioned at the detector input.

Radiography is used in industry to test the internal health of a part. It can detect all types of cavity or foreign material included in the part. Flat discontinuities are revealed when the radiation is parallel to the indication plane. The size of detectable discontinuities depends on the thickness crossed. The method has more limited sensitivity for dense, thick materials.

Radiography is used to test welds and to find foundry imperfections. It is also used extensively to verify the integrity of composite structures.

The major advantage of radiography is the production of a clearly-defined image of the material uniformity of a part. Contrasting images are easy to detect and different types of indication can be distinguished. Compared with ultrasound methods, it is relatively tolerant to surface states and the internal structure of the material. It can be applied to all types of material (aluminium, steel, copper alloys, titanium, composites, etc.). The  limitations of the method come from the costs of installations and consumables and the hazards of ionising radiation, which makes strict regulations and instructions mandatory.

Text prepared by Cofrend in conjunction with Patrick Bouvet (CTIF).