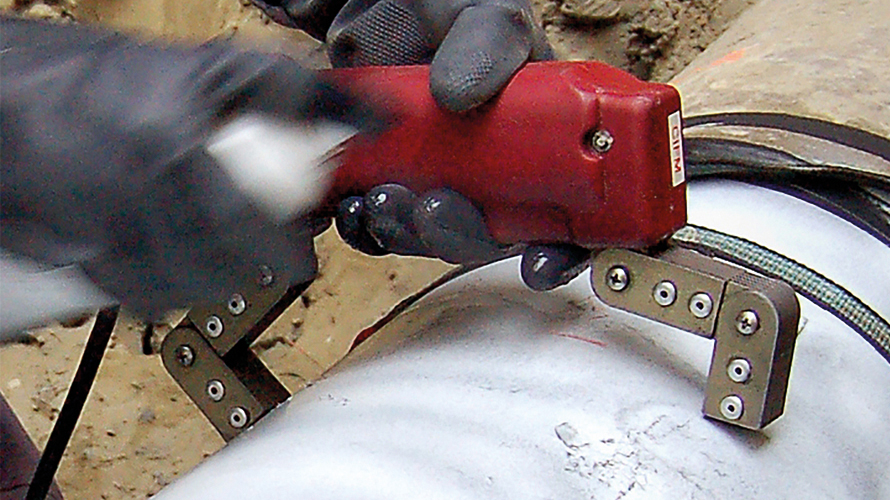 Magnetic particle testing is used to detect surface, surface-breaking or near surface discontinuities (in some conditions, up to a few millimetres deep) in ferromagnetic materials exclusively.

Although magnetic particle testing is more “restrictive” than penetrant testing, it is nevertheless preferred when applicable as it is much faster, among other things.

Nowadays, the growing use of magnetic particle testing can be explained by its reliability along with many recent major technical breakthroughs.

Although non-ferromagnetic alloys have been used more and more over the years, an increasing number of users have also been requesting multi-functional magnetic benches able to process both large and small parts. To achieve this, manufacturers’ design offices must be at their best and show enormous ingenuity.

Magnetic particle testing involves magnetising the part to be tested using a sufficiently strong magnetic field. The magnetic field lines distort when there is a discontinuity which generates a “magnetic leakage field”, also known as “magnetic flux leakage”.

These indications can be seen, under appropriate conditions, either under white artificial light or daylight or under ultraviolet radiation (UV-A) or blue actinic light according to the type of detection medium used.

There are miscellaneous techniques for magnetic particle testing:

Parts are demagnetised, when necessary, using demagnetisation equipment or any other appropriate device or technique.

Magnetic particle testing has been perfected significantly many times:

- in 1993: non-contact multidirectional magnetisation technique in 2D or 3D chamber;

- in 1995: appearance of the first alternating magnetic heads in France and growing use of the multidirectional magnetisation technique on magnetic bench;

- in 1999: magnetic bench with interface via operator console with creation of “pre-recorded parameters” and automatic adjustment by PLC;

Without entering into detail, let us clarify the following points:

This process can be implemented on a magnetic bench or in a non-contact magnetisation chamber.

Non-contact magnetisation by induced current flow: This technique involves generating a current in a normally “closed” part forming an electric circuit with itself (annular or tubular part, for example) and assimilating this circuit with a transformer secondary. The transformer primary is generally the magnetic circuit or the electromagnet from the magnetic bench.

Magnetic particle testing is, in fact, one of the so-called “global” methods, that enables the inspection of an entire part to be performed in a single operation. The relatively quick tests can be conducted equally well on 10 mm-long screws, electric diesel locomotive crankshafts or aircraft landing gear.

4. Advantage of the method

- testing of parts of a few millimetres to several metres long;

- robust equipment, can be used in difficult environments.

- sometimes difficult to detect near surface discontinuities (depending on their size, depth, etc.);

- need to use chemical products.

Text prepared by COFREND in conjunction with Pierre Chemin.